The QC we really do

In 2011, David Housley, Principal Biochemist of the Luton and Dunstable Hospital NHS Foundation Trust, and his colleagues prepared an audit of the Internal QC (IQC) practices in laboratories across the United Kingdom. They have graciously agreed to share the results of this audit.

Back in 2008, The North Thames Audit and Quality Assurance Group did an unusual thing: they audited the QC practices of their laboratories. Through a questionnaire, they assessed the IQC practices in 54 laboratories in part of the United Kingdom. Their results were published in an article the Annals of Clinical Biochemistry:

Not content with the first audit, Dr. Housley and colleagues expanded their audit to cover the entire United Kingdom. Generously, they have agreed to share the results with us and the website members.

What control rules do laboratories use? 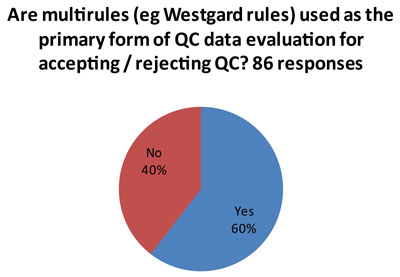 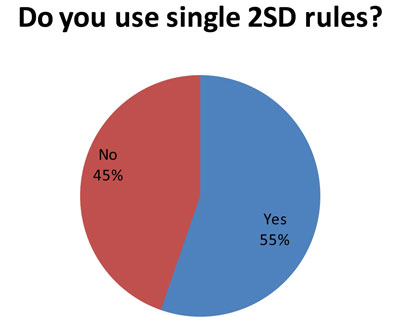 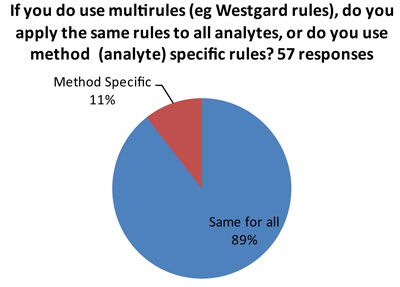 The ideal answer is that "Westgard Rules" are applied in a method-specific manner, so that all the rules aren't used on all tests. There are many tests on the market of such high quality (analytical performance) that they don't require "Westgard Rules" for QC. So if a laboratory applies "Westgard Rules" in a blanket fashion, there could be instances of "over-QC."

How do laboratories set control limits?

Again, this is the good news. Out of 79 responding laboratories, 78 indicated they use their own data to set control limits. Best Practice is for a laboratory to determine its mean and SD based on its own data.

(59 responses to this question) Nevertheless, for many laboratories, the manufacturer ranges are often used to set control limits. The reason this could be bad is that the typical manufacturer range is very wide, and the SD from that range is too wide for an individual laboratory to use. 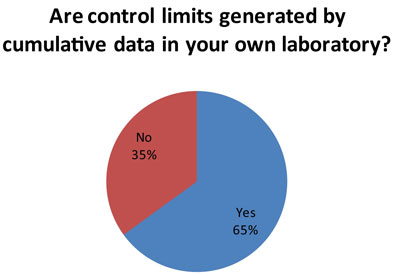 What do laboratories do with an out-of-control flag?

Here's one of the more unhappy revelations. Probably stemming from the use of 2s control limits, which has a high false rejection rate, many laboratories are responding to an out-of-control result by repeating the control (57 laboratories out of 69 responses) . See Repeated, Repeated, Got Lucky to understand why this might not be the best response. 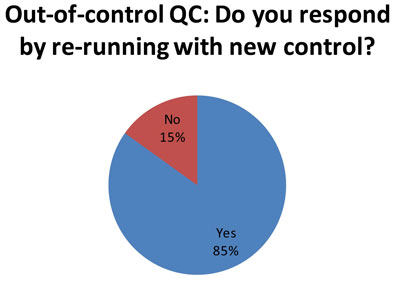 Here is equally distressing news. When a simple repeat doesn't bring controls back "in", many labs (62  of 73 responses) try to see if a new control will fall "in." See Doing the Wrong QC Wrong for advice on why that, too, is not an ideal response. 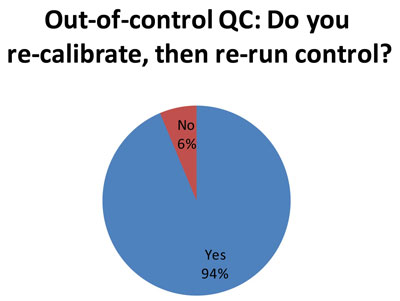 74 out of the responding 79 laboratories indicate that they recalibrate after an out-of-control flag. This is an appropriate response to an out-of-control flag. It represents actual trouble-shooting, rather than just trying a "do over" with repeated or new controls. What is worrisome, however, is that we know many of these laboratories in the audit are using 2s control limits, which generate a substantial number of false rejections. Thus, the re-calibration may only be caused by the 2s limits, so the trouble-shooting is really only chasing ghosts. It would be better for laboratories to perform QC Design, which allows them to adapt the QC procedures to fit the quality required by the test and the perfomance observed the method. Then you only get an out-of-control result when there's a real problem, and you only re-calibrate when there's a true need to recalibrate. [See an interesting note of caution about this practice] 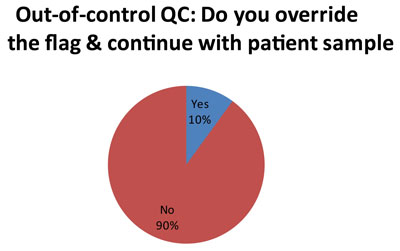 Here is perhaps the most troubleing finding. A minority of laboratorie (5 out of 50 responses), at a certain point, simply over-ride the QC flags and continue testing with patient samples. Now we don't get much explanation in the audit as to how or why each laboratorty makes this decision. But we can guess that for laboratories using 2s control limits, they get tired of repeating results and simply decide to ignore certain flags. The audit did probe further about this practice, which has been termed "non-ideal QC." 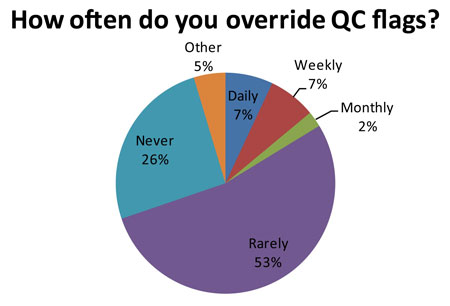 Out of 84 responding laboratories, 14 of them (16.7%, or about 1 in 6 labs) regularly ignore their own QC. Now that number may be artificially high because of the false rejection rate caused by 2s limits. "Ignore" may also be too strong a word - the audit uses the term "over-ride." But essentially these laboratories have lost trust in their own QC system. There is a danger that the more these labs over-ride a QC flag, the more acceptable that practice becomes. Eventually, it may be acceptable to over-ride all QC flags, even when there is a real problem occurring.

My UK profession at present remain committed to trying to improve quality. This audit is designed to emphasise that what we believe in does not get implemented in practice. Auditing IQC practice within a lab is important, it tells us what is being done (and isn't) and the audit process can serve as a supplementary tool to support traditional IQC techniques.

One of the problems with the QC audit standards as they stand is that we have not indicated strongly enough what we believe acceptable levels of practice are - in a quantifiable way that allows people to truely measure their performance against the standards.

I am of the opinion that most labs in theory are happy to quote that they have a rigorous IQC programme, but seem to be naive or unaware of the realities about how poor the programmes actually are. It is difficult to truly understand why something everyone apparently believes in is practiced so poorly. I hope the audit begins to shed some light on where the issues lie so that we can address them.

For me the major observations from the audit are: