An earlier post on this website discussed the use of probit analysis for determining the limit of detection (LoD) for Nucleic Acid Amplification Tests (NAAT).

Probit Analysis 2: Issues with Verification of Limit of Detection

An earlier post on this website discussed the use of probit analysis for determining the limit of detection (LoD) for Nucleic Acid Amplification Tests (NAAT).  Probit analysis is a statistical technique that fits the “positivity rate” from replication experiments to a sigmoid or S-shaped curve that represents the cumulative probability function for a Gaussian distribution.  For purposes of exploring the use of probit analysis, part 1 of this series described how the method of Finney [1] was implemented via an Excel spreadsheet to compare estimates of LoD with the results of 2 examples in the CLSI EP17-A2 document [2] and 1 example from the literature [3].

We expect that the results here are within the uncertainty or confidence ranges of the “claimed” LoDs, but determining those confidence limits requires more complicated calculations with statistical software, such as the Maplesoft program described by Vaks [4].  Other programs, such as MedCalc, Analyze-it, or Minitab also support probit analysis and may be more familiar and available to clinical laboratory scientists.

However, in cases where LoD is estimated by probit analysis, the assessment of agreement between observed and claimed results is more complicated.  As pointed out in Part 1 of this discussion, use of probability graph paper is sufficient to make an estimate of LoD, however, calculation of confidence limits to go along with such an estimate requires special statistical software.  Because of this, the manufacturer should be responsible to document the confidence limits for their claimed LoDs, as should the authors of published studies of test performance.  Then laboratories can assess whether their estimate falls within the range expected by the manufacturer.

Estimating C95 instead of C50

Historically, probit analysis has been used for bio-assays, e.g., to assess the kill rate of insects as a function of the dose of insecticide.  The dose-response curve is expected to have a sigmoid shape and the transformation of kill rates to probits should linearize the response, which then allows the data (kill rate vs log concentration) to be analyzed by linear regression. Typically, the midpoint of the dose-response curve, called C50 for the concentration having 50% kill rate, is estimated to characterize the potency of the insecticide.  An estimate of C50 is expected to be more reliable than the estimate of C95 (corresponding to the concentration for the 95% hit rate) that is used for the LoD of NAAT tests.  Characterizing the reliability requires calculation of confidence limits, which is a more complicated task that often requires special statistical software.

Manufacturers’ claims for Emergency Use Authorization often estimate LoD directly based on the 95% positivity rate for a single concentration out of a series of dilutions, thus avoiding the use of probit analysis.  For studies by manufacturers and those published in the literature that do use probit analysis, the estimates of LoDs are often limited by the number of data points in the “imprecision interval” from C5 to C95.  Concentrations that yield hit rates of 0% and 100% are generally not useful when transforming to probits to linearize the data, thus limiting the number of useful data points.

Estimating C95 rather than C50 creates a larger uncertainty or wider confidence limits because of extrapolation away from the mean of the data.  In that context, the use of probit analysis for estimating the LoD of NAAT tests may not be an optimum approach.  Nevertheless, that is the approach recommended by the CLSI EP17-A2 guidance as the best laboratory practice.

The analytical LoD is the best predictor of clinical sensitivity, thus determination of LoD is of great importance for characterizing the performance of qualitative tests.  It is standard practice that estimates of clinical sensitivity (Se) and clinical specificity (Sp), or positive percent agreement (PPA) and negative percent agreement (NPA), be accompanied by 95% confidence intervals [7].  Thus, it might be expected that claims for LoDs should also be accompanied by confidence intervals.  The CLSI EP17-A2 guidance does not specifically address the need for confidence limits for the estimates of LoDs, but the “worked” example in Appendix C does provide a graph that shows such confidence intervals.  The software used for analysis of the data in this example is not specified.

To provide more clearly documented estimates, we have utilized the Minitab statistical package [8] to assess the expected reliability of the LoDs for the examples described in Part 1 of this series.  Minitab has a defined probit analysis routine that is simple to use.  The probit analysis screen is shown below.  The user can specify the “response in event/trial format”, which means the data will be entered for the number of events (positive results) and the total number of trials.  These are the raw numbers used to calculate “hit rates” or the proportion of positive results.  The user also specifies the “stress” which corresponds to “dose” or “concentration”.  In this case, the concentrations were converted to the log 10 scale.  The raw data were then entered in the Minitab “worksheet” where the columns are identified as “Conc”, ”Log10conc”, “Ntotal”, and “NPos.” 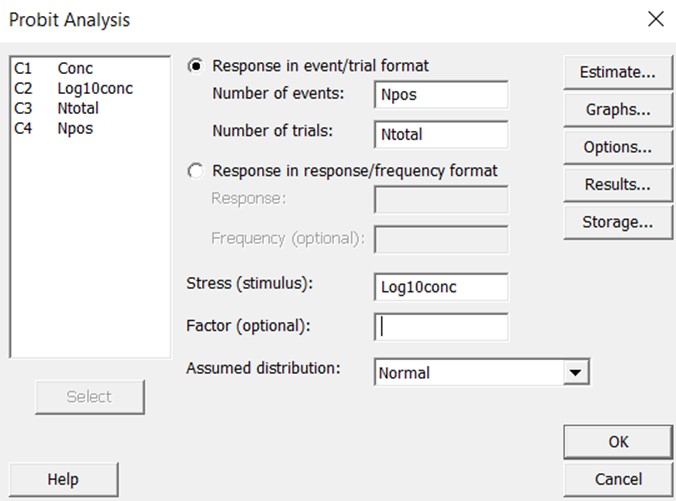 The graphical output then shows the line of best fit and the confidence limits about that line.  Extensive statistical results are available to assess goodness of fit, uncertainty in the estimates of the slope and intercept, standard error about the regression line, and predictions of “fiducial confidence limits” for each percentile value.

Fiducial confidence limits describe the expected range of possible dose concentrations (x-values) that correspond to a certain probit (y-value).  Traditional confidence limits work the other way around.  They describe the expected range of y-values for an x-value of interest.  For example, in characterizing the uncertainty when directly estimating LoD as the concentration with 95% hit rate (detection rate, positivity rate), the limits are applied to the proportion that represents the hit rate to describe the range of positive results that are expected out of a certain number of replicates. The fiducial confidence limits associated with probit analysis are used to define the range of concentrations that can be ascribed to a kill rate of 50%, i.e., the limits apply to the value on the x-axis rather than the y-axis.  In the application for LoD where the y-value of 95% is by definition the limit of detection, fiducial limits provide an estimate of the range of concentrations that might characterize C95.

This is the example that was reconstructed from the graphical results presented in the EP17-A2 document.  This example was used to illustrate the transformation of the “hit rate” curve to the probit straight line that was used for regression and prediction of the C95 concentration. 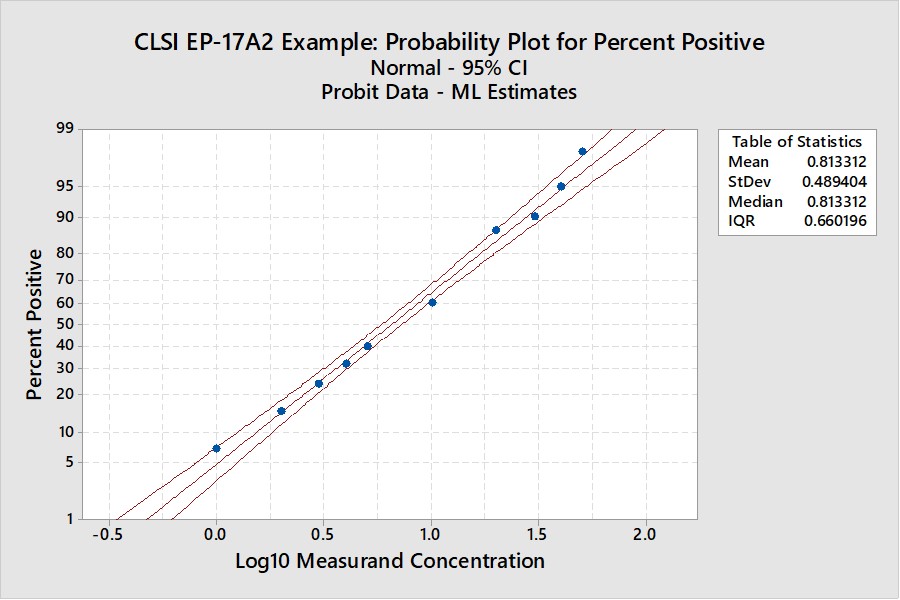 Notice that the y-axis here is scaled for the cumulative probability distribution and the x-axis for the log of the concentration.  An accompanying table (See Appendix 1) provides upper and lower fiducial confidence limits for every percentile from 1 through 99.  For a the C95 of 41.5, the fiducial limits are 34.1 to 52.5.

Recall that the estimate for the LoD by our earlier probit regression was 39.2 and the CLSI result was 36.5.  Both of these estimates fall within the fiducial confidence limits estimated by the Minitab program and the agreement between these 3 different calculations can be considered within the uncertainty of the methods.  But, remember that this is an unusually good set of data with 10 points in the useful probit range.  The lower confidence limit is 18% lower than the C95 estimate and the upper confidence limit is 26% higher.  That’s approximately ± 20% for the likely “best case” experimental data. 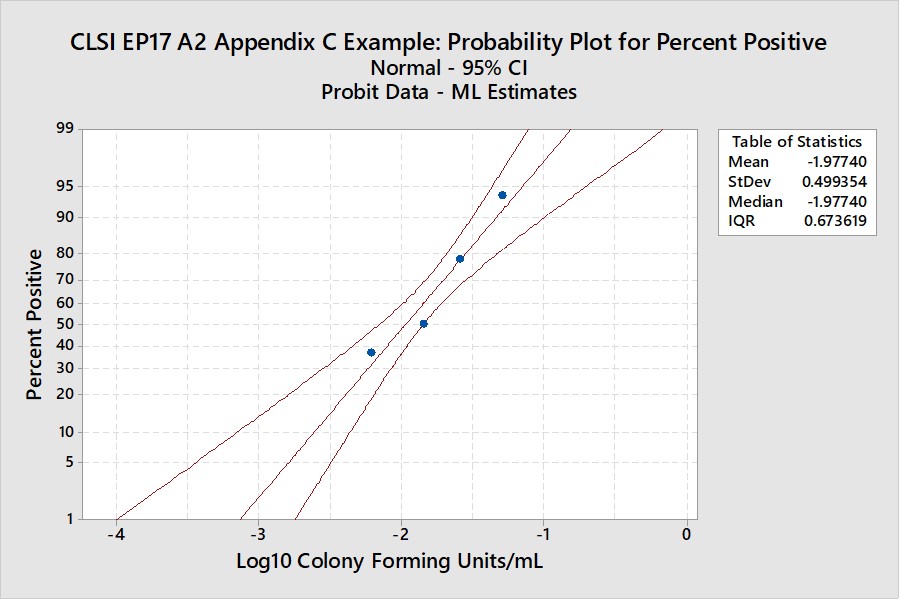 This example is for the Cepheid Xpert Xpress SARS-CoV-2 test where 7 concentrations were evaluated by experiments involving 22 replicates, with hit rates ranging from 4.5% to 100%.   The graphical results for concentrations with less than 100% hit rates are shown below: 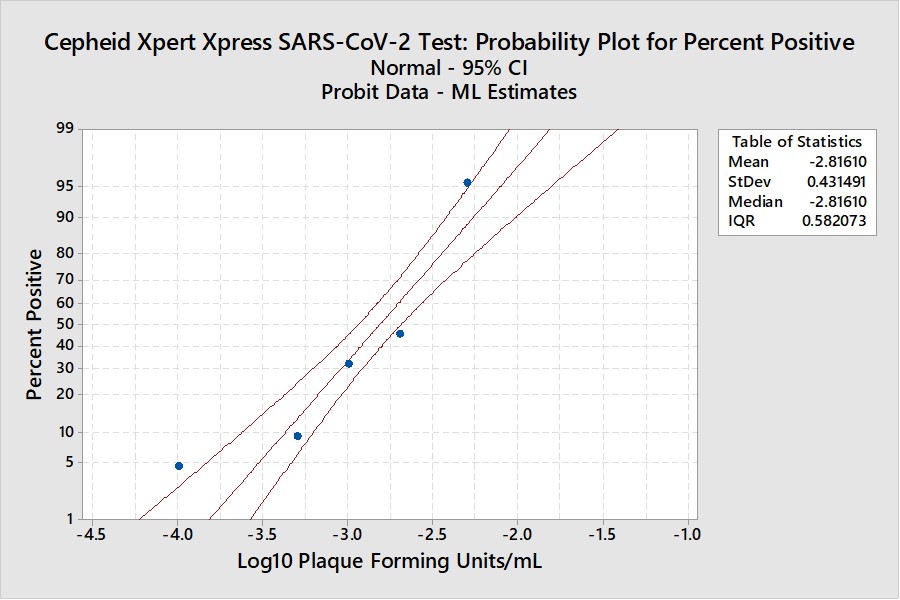 The LoD estimate for C95 is 0.00782 PFU/mL with confidence limits of 0.0051 PFU/mL (35% lower) and 0.0156 PFU/mL (98% higher).  See Appendix 3 for fiducial limits.  Our earlier estimate from the Finney probit model using 5 points was 0.010 PFU/mL compared to the literature claim of 0.005 PFU/mL.  Using the Finney model with only 4 points gave an LoD of 0.006 PFU/mL.  All of these estimates fall within the confidence limits determined by the Minitab model, but again the uncertainty in the estimates is seen to be large.

These examples illustrate that the estimation of LoDs for NAAT methods by use of probit analysis may have large uncertainties as assessed by calculation of fiducial confidence limits.  The best case may be ± 20%, but uncertainties from 40% to 100% may be more realistic. Given the importance of analytical sensitivity in influencing clinical sensitivity, it would seem that better protocols are needed to assure better estimates of this critical performance characteristic and that the current EP17-A2 guidance for use of probit analysis is not adequate.

For laboratories, instead of probit analysis, we recommend the simpler direct estimation by 95% hit rate that also provides a simpler approach for verification of claims using confidence intervals for proportions (expressed in terms of the number of positives expected out of an experiment with a specified number of replicates).  However, laboratories should pay more attention to preparing the appropriate dilution series and more carefully studying those concentrations near C95.  The graphical use of probability paper may provide an initial estimate of LoD that can lead to a more thorough investigation of multiple concentrations to obtain a final estimate of C95.  This should be a more practical approach for laboratories to assess LoD, as well as providing a simpler approach for verification of a manufacturer’s claim. 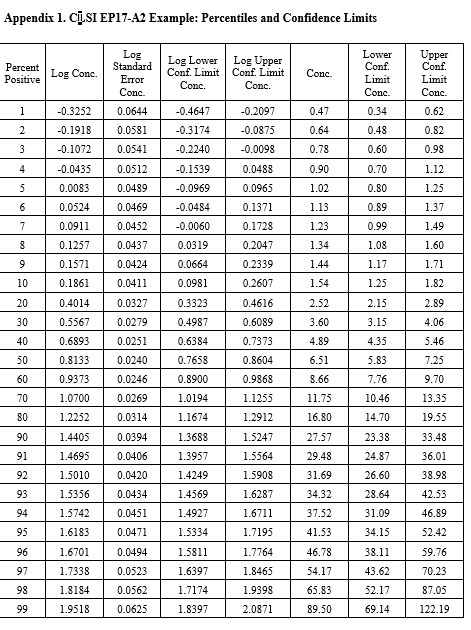 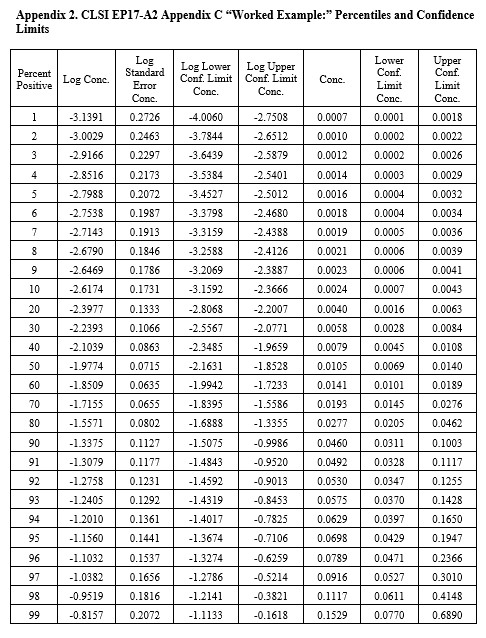 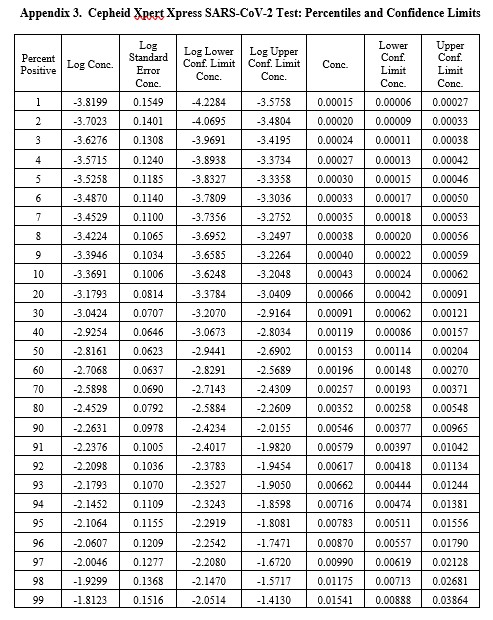