Results of the survey of laboratories and their IQCP readiness. With less than nine months left, how much work do US laboratories have left to accomplish?

The 2015 IQCP survey: are individual labs prepared to plan their quality?

Contrast the survey results from outside the US

The freight train that is the Individual Quality Control Plan (IQCP) regulation has long left the station, but many labs are still struggling to find their tickets. In early 2015, we opened up a survey to determine the status and sentiment of US laboratories grappling with the new requirements from CMS. We received more than 450 responses, more than 400 of those from US labs.

What type of labs responded to the survey? 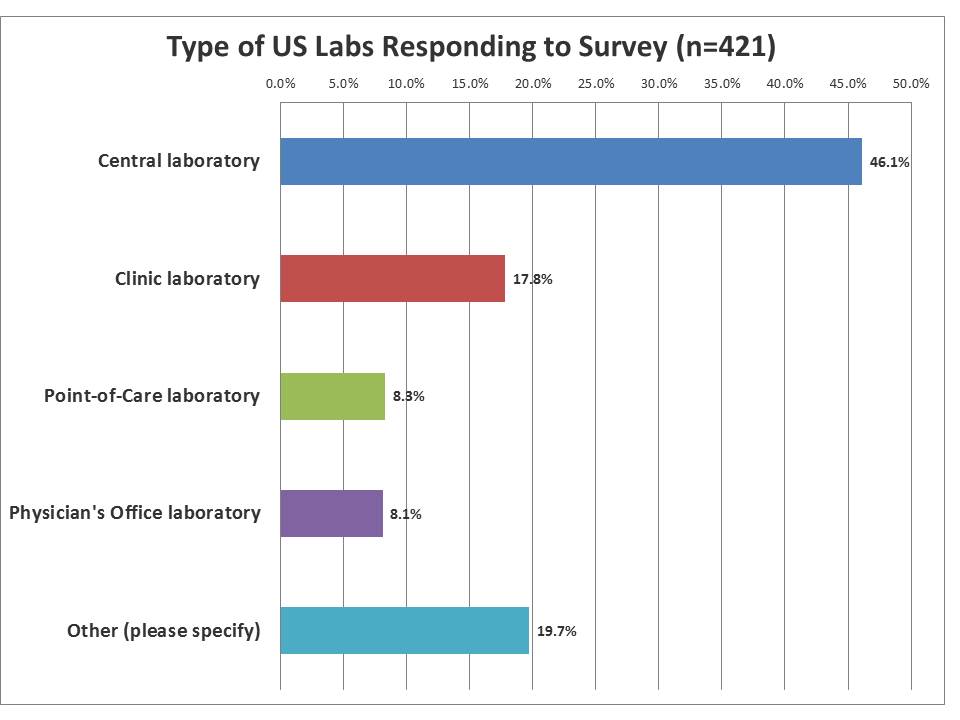 A near-majority of the labs responding were from central laboratories, but the smaller laboratories made up approximately a third of the responses. This reflects more on the membership of the Westgard website than the demographic realities of labs in the US, where smaller labs heavily out-number the core labs. The "other" category was mostly filled by respondents trying to be more specific about their laboratories or to detail if they worked at non-laboratory instutitions, such as manufacturers, government agencies, accreditation agencies, etc.

What are US Labs doing to implement IQCP? 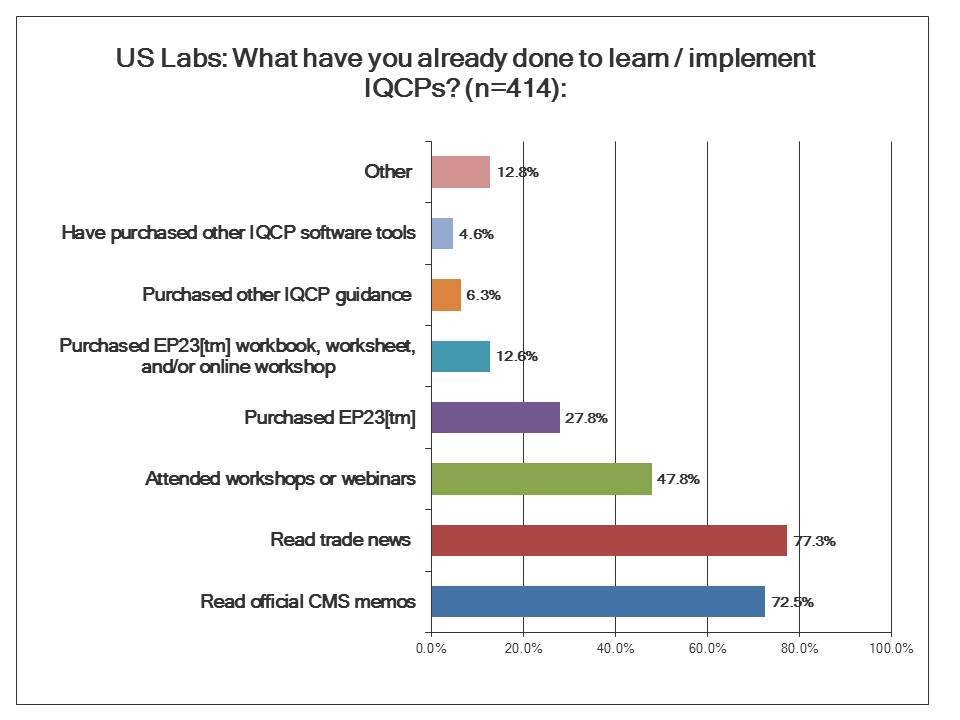 If you look from the bottom up, you can see that a majority of laboratories have been taking advantage of all the free resources on IQCP. The CMS memos and brochures to educate the laboratory community have succeeded in alerting most labs that a change is coming. The official CMS memos on IQCP have reached most labs, and the trade journals have written enough articles to spread the news. However, slightly less than half of labs have actually started being more active than passive, by listening to webinars or attending seminars about the IQCP policy.

There is a bigger drop off when it comes to investing money adopting a proactive approach to developing an IQCP. The most popular guideline that isn't free is the CLSI EP23[tm] guideline. This is the official document that informed the creation of the IQCP regulations. There are also workbooks, worksheets, and even an online workshop related to EP23[tm]. Fewer labs still have puchased other guidance materials on IQCP. And the fewest number of laboratories of all have gone out to purchase software. You might think these new regulations would create a new market for tools and software to build IQCPs, but it doesn't look like that's happening. We'll see why when we look at the response to another question.

EQC: How many US laboratories are using it? 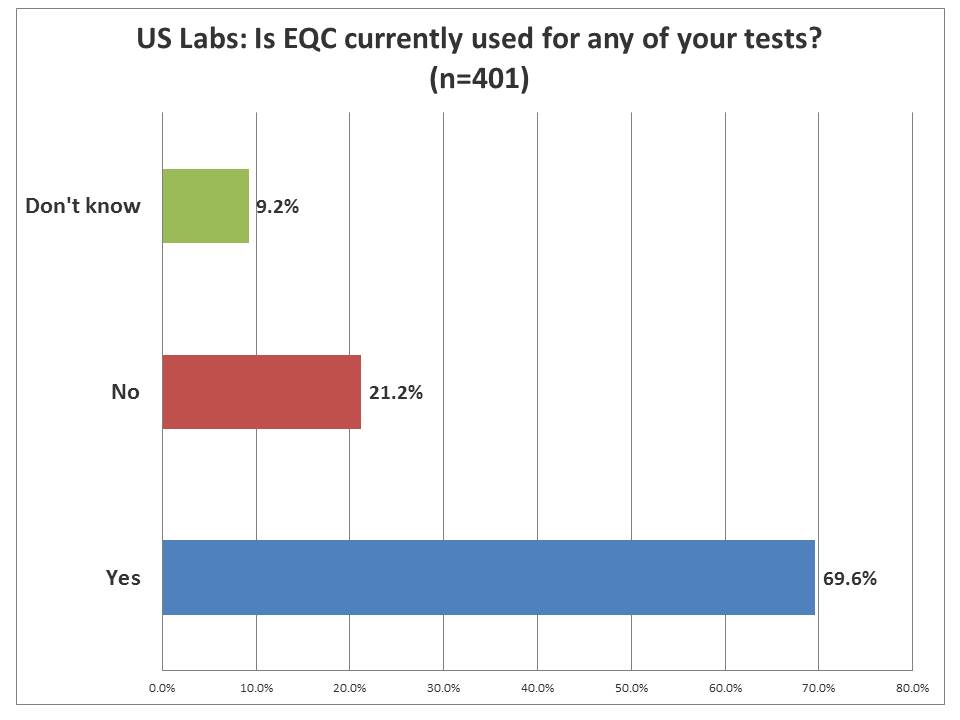 An overwhelming majority of laboratories are using EQC in their laboratory operations. So even if there were more core laboratories that responded, clearly they knew where EQC was being used. EQC, by official CMS parlance, stands for "Equivalent Quality Control." Remember, it's EQC that got us into this mess. EQC was introduced and quickly discredited as lacking any scientific basis (As CMS put it, "We blew it"). So in order to replace EQC, they had to conjure up a new technique. Borrowing the trappings of Risk Analysis, they had CLSI create EP23[tm] and CMS built IQCP on that foundation. On December 31st of this year, all those EQC implementations will become illegal, and the only acceptable replacements have to be in the format of IQCP.

What is the state of IQCP readiness? 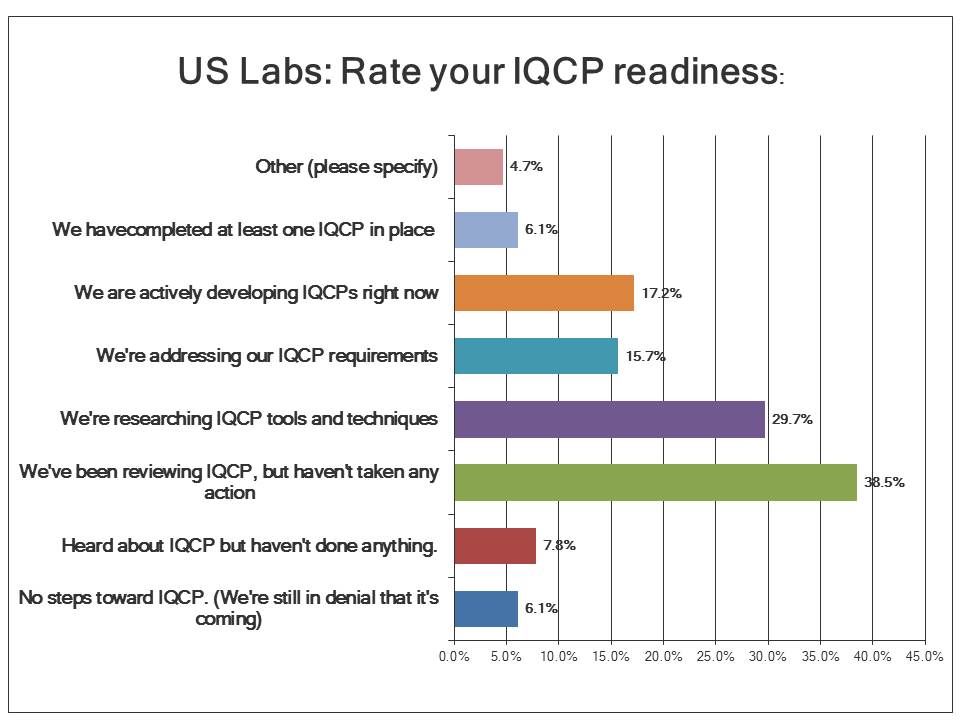 Less than 10% of labs have actually implemented even a single IQCP at this point, pointing to a real problem in the implementation of these new policies. Over 17% of labs are currently developing their IQCPs. Another 15% are setting their IQCP requirements. But a majority of US labs are still in the research and review stage: they're looking at what to do without having done anything yet. Given that nearly a year and a half of the IQCP window is nearly expired, US labs seem to be slow to change.

If there's any good news, it's that most labs in the US are at least aware of the new policy. Only about 8% of labs know about IQCP but haven't done anything yet. And only 6.1% are not just lacking in any progress, but are in denial of IQCP itself.  Notice that this is the same percentage as the number of labs that have completed at least one IQCP.

How do laboratories plan to use IQCP? 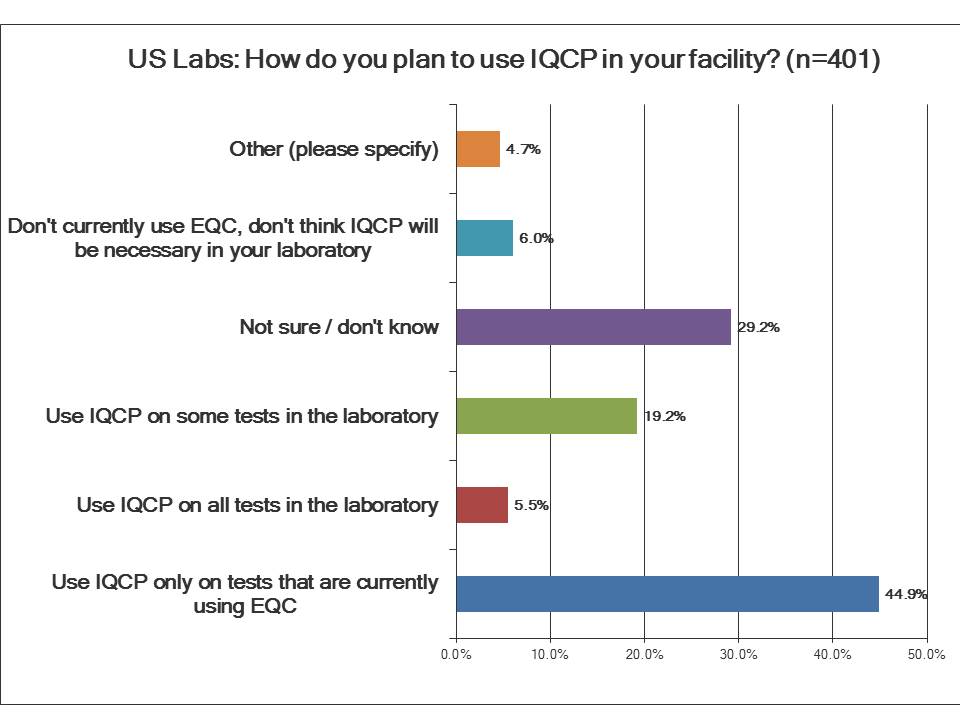 Almost a third of labs are still not sure if IQCP applies to them, obviously concerning. Just under half of the labs say that they will only apply IQCP to the tests where they are currently using EQC. This is really what IQCP is intended to do - replace the failed EQC policies. About one in five labs will go further and apply IQCP to some tests, not just the EQC tests, an expansion of the IQCP into testing beyond the point-of-care. And about six percent of labs intend to apply IQCP to all of their testing. For traditional hospital labs, this is a bit ambitious and possibly reflects a misunderstanding of IQCP. IQCP isn't a mandatory change in regulation for all tests. It isn't supposed to replace traditional QC for all testing, although the marketing of this policy may have tried to imply this. About the same percentage of labs believe they won't need to implement IQCP at all. Those are probably labs that don't have currently EQC implementations in place, so there is no need to replace those with IQCP (or possibly those labs are still in denial).

What resources will laboratories be able to devote to developing IQCP? 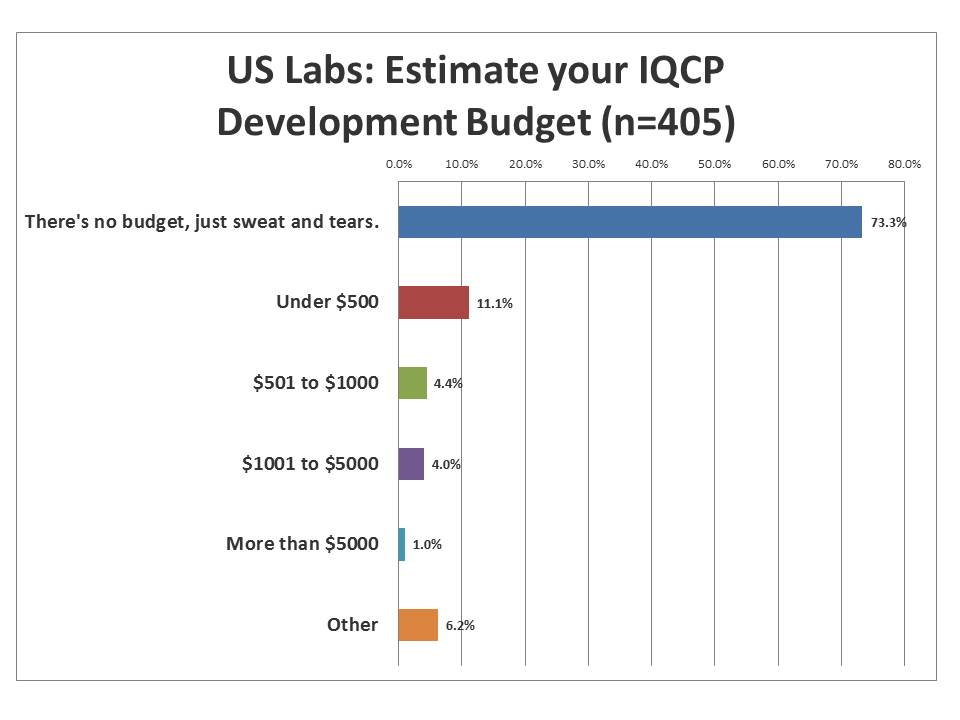 The vast majority of labs have no money to devote to the additional workload of developing IQCPs. For them, IQCP is another "more with less" situation. They will have to squeeze the work out of their existing staff and existing budget, seeking out whatever free resources they can find. A few labs still can tap into a few hundred dollars of discretionary funds. A smaller number still have a few thousand. But almost no one has significant funding. Can we expect to get a proper IQCP when the staff and funds are not sufficient? 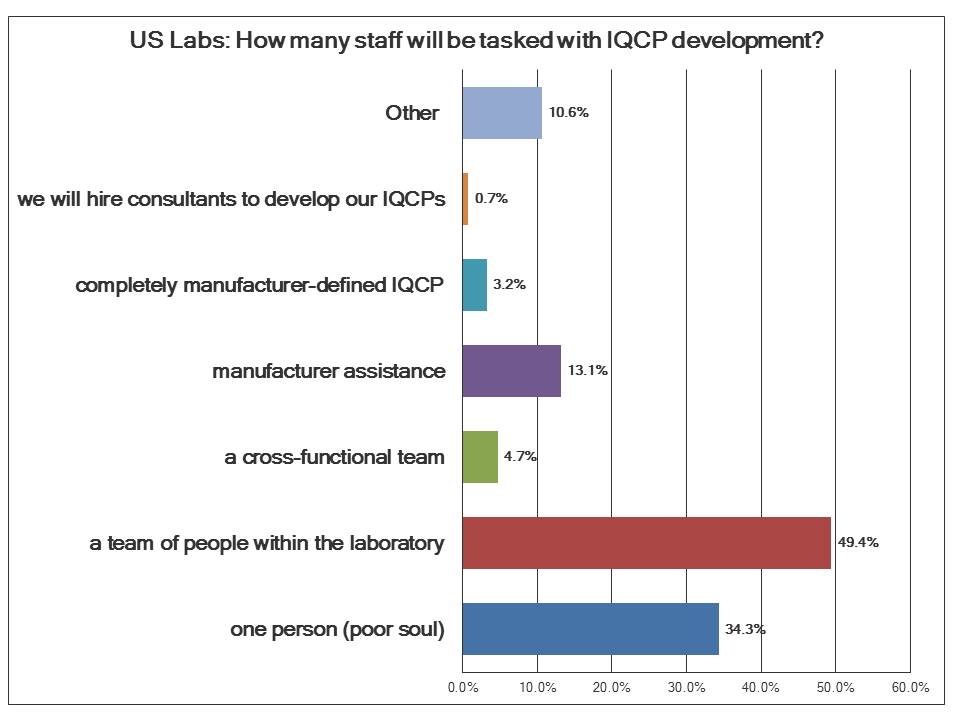 About a third of labs will only be able to dedicate one person to the task of developing IQCPs. This reflects again the stretched resources of the laboratory. Just under a majority of labs will put together a team of people within the laboratory. Far fewer expect to build a cross-functional team, encompassing disciplines outside the laboratory like clinicians, nurses, device experts, etc., even though the literature on risk assessment says that this is the proper way to perform a risk assessment.

Many more labs expect laboratories to provide assistance in developing IQCPs. Note that the regulations are explicit in that the manufacturer can provide help, perhaps some information and templates, but each laboratory has to develop their own Individual QCP. Thus it's not a good sign that 3.2% of labs think that the manufacturers are going to do all of this for them.

Finally, reflecting again the budget squeeze on labs, less than one percent of laboratories believe they will hire consultants to help them with this IQCP development process. There simply isn't the money to spare to hire professionals to perform this task.\

The survey results can be read one of two ways. It depends on whether you want to be optimistic or pessimistic. An optimist would be heartened by the level of awareness - a majority of the laboratories know that some regulatory change is coming. The pessimist would point out that most labs haven't taken any action, appear confused, and are running out of time.

A realist would point out that IQCP has all the hallmarks of an unfunded mandate. A high burden with little hope of a properly funded or resourced solution. This is a recipe for an implementation failure. Too few techs with too little money are going to be tasked with the responsibility of developing IQCPs. The result is likely to be incomplete risk assessments, inadequate quality control plans, and insufficient monitoring. A lot of residual risk is likely to get passed on to the patient.

As CMS has been saying over and over, IQCP is a choice. If labs have another choice, they should strongly consider it. If they don't have a choice, they need to do better than the survey results here: they need to invest more, plan more, and monitor more.

Contrast the survey results from outside the US