2015 IQCP Survey: The View From Outside

While the 2015 IQCP survey was mainly targeted at US laboratories, since that's where the regulation has been developed and will have the power of law, a significant number of respondents were from outside the US. Their responses and views are an interesting contrast to those of laboratories inside the US. What would you guess, that labs within the US or outside the US are more prepared to implement IQCP? The answer may surprise you...

The 2015 IQCP survey: The View from Labs Outside the US

See the US Lab Survey responses

What labs outside the US responded to the survey?

The make up of the responses was heavily weighted toward the central laboratory, more so than we saw in the US respondents. The US responses had more office labs and POC labs, but those were barely present in the foreign responses. This might simply reflect the fact that the Westgard Web membership, outside the US, is heavily made up of professionals from core laboratories. "

What steps are labs taking to implement IQCP? 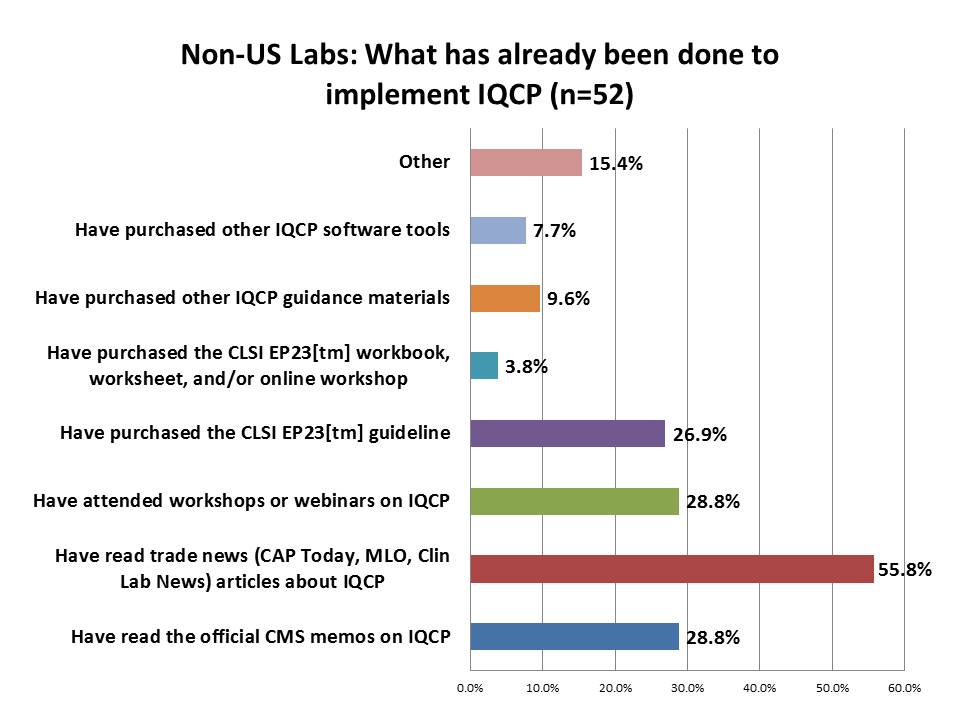 "Just tell me what our lab needs to do!!" 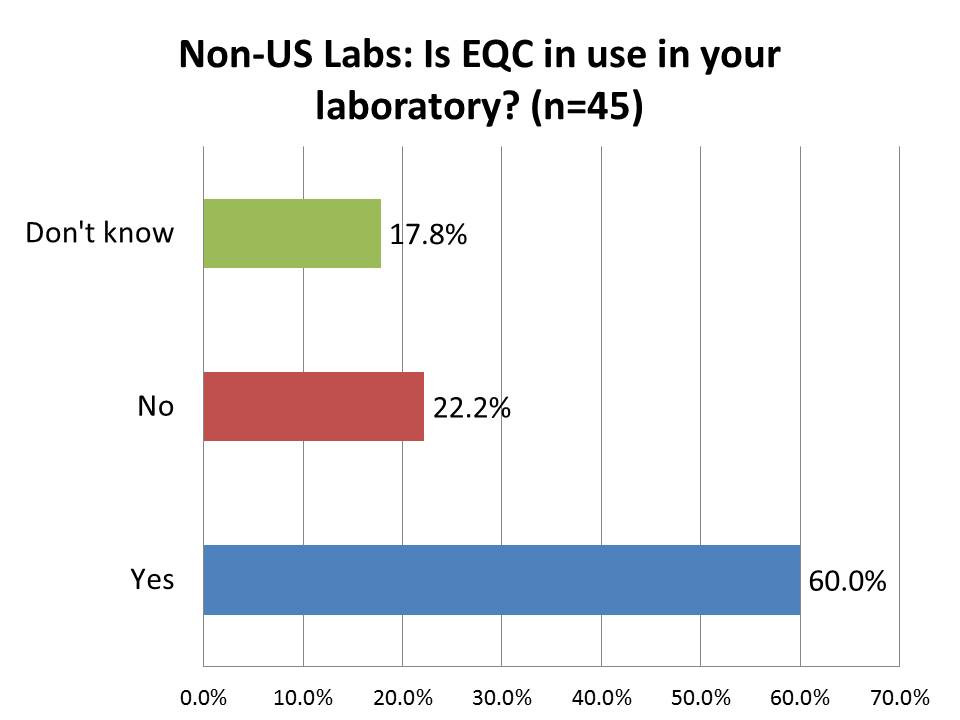 Again, here is a response that I found surprising - a majority of laboratories outside the US are implementing EQC. "Equivalent Quality Control" is the a CMS policy that was so unpopular they had to develop a replacement for it: IQCP. While 70% of US labs are using it, 60% of labs outside the US are using it, too. I guess I underestimated the power of the US regulations and trends: practices implemented within the US are frequently considered "best practices" by laboratories outside the US. We have frequently told foreign laboratory professionals the opposite: not to make the same mistakes as the US regulators and labs - do something more sensible.

What is the state of IQCP readiness outside the US? 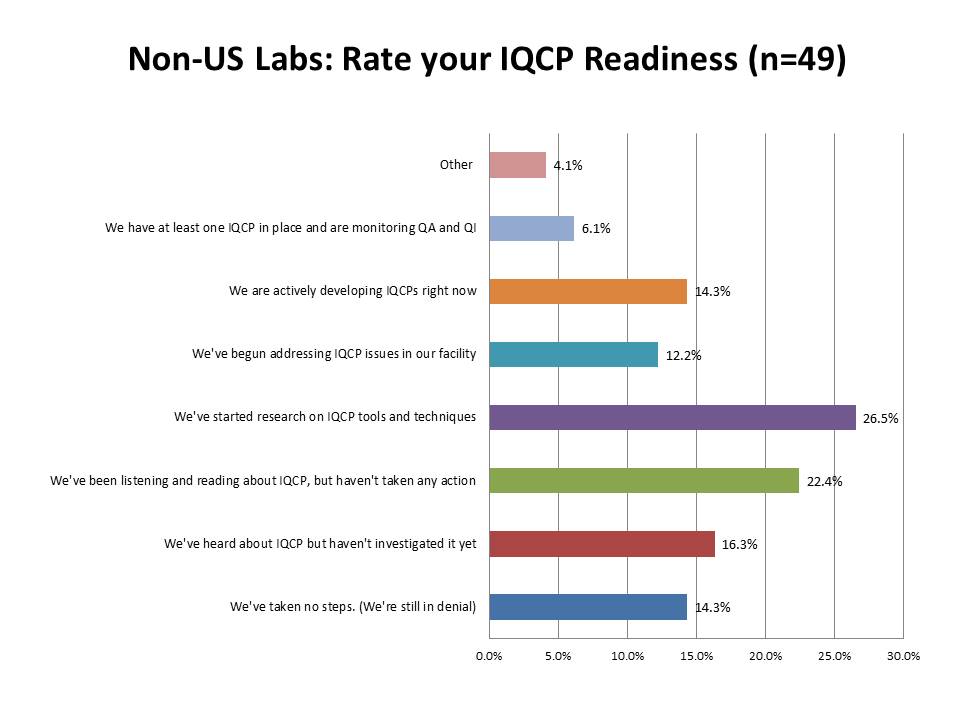 Again, fascinating to note that about the same percentage of labs outside the US as inside the US have actually completed an IQCP (just around 6%). There are about the same percentage of labs that are developing IQCP plans (17.2% US labs, 14.3% foreign labs) and addressing IQCP issues (15.7% US labs, 12.2% foreign labs) and researching tools and techniques (29.7% US labs, 26.5% foreign labs). Where there is more contrast is on the "inactive" side of the scale. Of the foreign respondents, only 22.4% of labs said they hadn't taken any steps toward IQCP implementation, while in the US, that percentage is much higher: 38.5%.  Is it possible that more foreign labs are preparing for IQCP than labs within the US? Well, the last two categories show us that answer is no. Twice as many foreign labs (16.3% vs. 7.8%) haven't even investigated IQCPs yet. And 14.3% of labs outside the US are in denial, while only 6.1% of labs within the US are still in that state.

How are laboratories planning to use IQCP? 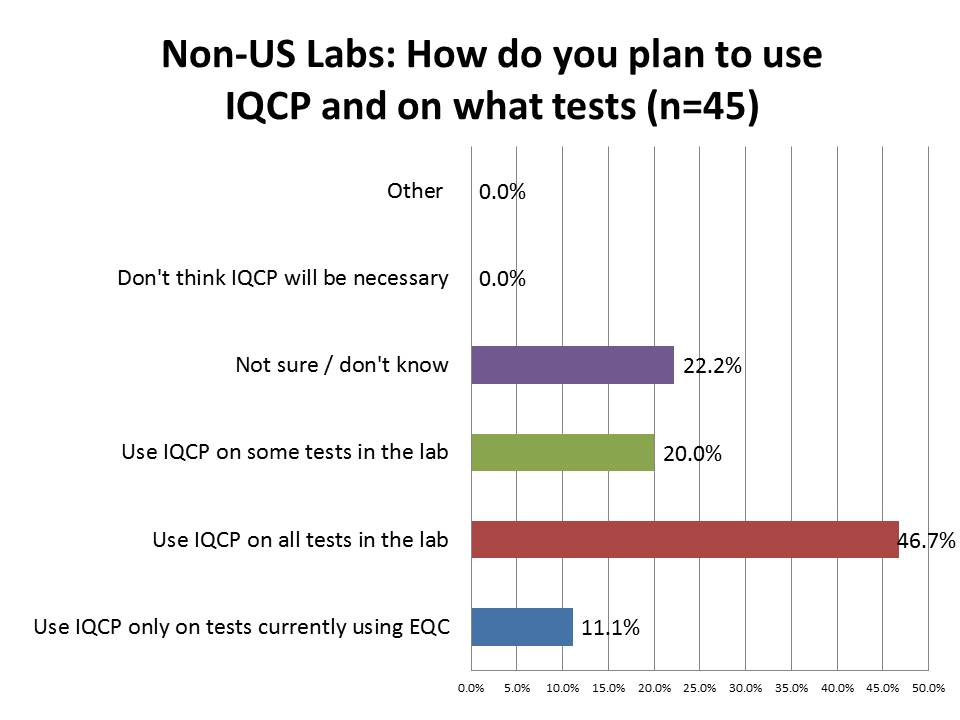 Again, a striking difference in foreign labs: many more of them (46.7% vs. 5.5%) of them plan to use IQCP on all their laboratory tests. I might be tempted to state this is an overzealous implementation of the policy. Many more labs in the US (44.9% vs. 11.1%) plan to use IQCP only on tests currently using EQC.

What resources do laboratories plan to commit to IQCP development?

You would think that the country where IQCP is going to be mandatory will have higher resources devoted to its implementation, but the foreign labs actually seem to have more money to spend on this.While only 1% of labs within the US plan to spend more han $5000, 4.1% of the foreign labs plan to spend that on IQCP development. And while US labs 73.3% of US labs report they will have NO budget at all, that number is only 49% for foreign respondents. Perhaps because outside the US, there is more of a commitment to excellence than compliance (and healthcare systems receive more support from the government), they have more resources they can commit to quality.

How many staff will be dedicated or tasked with IQCP development? 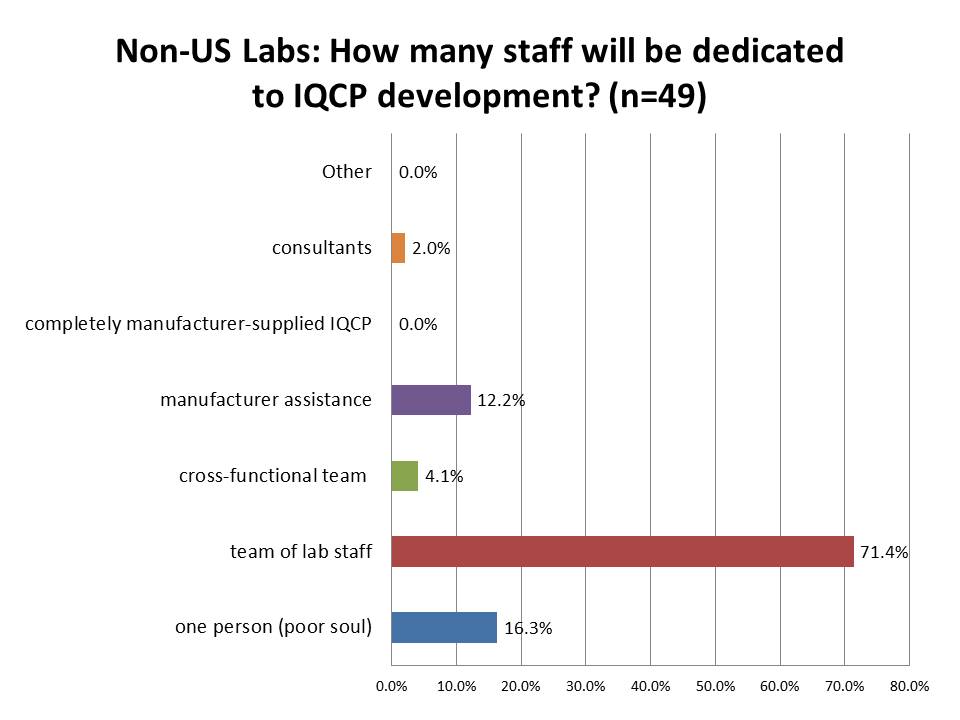 Again, the US seems to be coming up short!  Whereas in the US, twice as many labs (34.3%) expect to only have one person build their IQCPs as do labs outside the US (16.3%).  Labs outside the US are also more committed to developing IQCPs with a team within the lab (71.4% vs. 49.4% in the US). The expectation of having a cross-functional team or manufacturer assistance is about the same. But no foreign labs expect to obtain a complete IQCP from their manufacturers (vs. 3.2% of US labs) and 2.0% of foreign labs expect to employ consultants (vs. just 0.7% of US labs). Labs outside the US seem to be willing to commit more staff and resources to the development of IQCP.

It's entirely possible that the foreign labs who responded to the IQCP survey are not truly representative of the rest of the world. The size of the US response was large enough that we can make more of an assumption that those survey results are more representative of the state of the US labs. If we were to accept the foreign lab responses as true, we would reach an embarrassing conclusion: that labs outside the US seem to be willing to spend more money, acquire more tools and materials, devote more staff, and implement IQCPs with more success than labs inside the US. That is, IQCP might be more successful in the countries where it is not mandatory.

Even if we do dismiss the foreign responses as unrepresentative, this contrast is still striking. It may reflect a broader difference in culture and professionalism between the US and the rest of the world. Inside the US, the crushing pressures to cut costs and merely maintain compliance are suffocating the quality of the lab. Outside the US, more professionalism reigns and the dedication to quality persists. In many countries, labs still compete on quality and have to prove their quality to their customers (in the US, it is often assumed that all labs have the same quality and nothing needs to be improved)

The final point that can be made is that this compare-contrast exercise tells us that US labs are in a quality deficit, when it comes to IQCP and other laboratory processes. While health care may becoming more available, and the numbers of the insured are on the rise, the quality of that care seems to be heading down, not up.