Total Allowable Error can be used to benchmark test performance. It can be used to help optimize QC Design and determine Sigma-metrics. But can it be helpful when moving tests from one platform to another? One of our most popular guest authors, Hans van Schaik, discusses how he used TEa in this way at Ziekenhuis St. Antonius

Using Total Error allowable in the migration of immunochemistry.

As Siemens announced the end of the technical support for our two (former DPC) Immulite 2500 analysers was due for july 2012, it was decided to move the immunochemistry tests performed on these machines to the Roche Cobas 6000-CEE analyser.

Only a limited number of tests that were not available from Roche (yet) and the allergy testing would be installed on the replacing Immulite 2000 XPI.

Reagents for the Immulite 2500 would be available from Siemens until june 2012, as long as stock lasted.

CA19.9 was not performed on the Immulite 2500, but sent to an external laboratory, it was decided to implement this test on the Cobas 6000 too.

CA15.3 has been installed on the Cobas 6000 before and is therefore not in the comparison.

ß2-microglobulin is performed on the C-module of the Cobas 6000 and will not be included in this essay.

The migration had to be planned carefully, because immunochemistry is far less standardised and harmonised, causing differences in results produced on different systems.

Especially for the tumor markers these method based differences can cause problems in the follow-up of patient results.

Before starting the evaluation the EQA results were studied, giving us a first impression about the differences we could expect.

The calculated differences are shown in table 1.

For the method comparison of the tests two different procedures were used:

-       To avoid the influence of different epitopes in the tumormarker assay we made a low and high pooled serum, each composed of at least 20 different samples. Both pools were measured in 5-fold on the Immulite and Cobas 6000.

-       The other tests were evaluated by measuring 20 individual patient samples on both analysers.

CA19.9 was compared by checking the result received from the external lab with the result produced on the Cobas 6000.

The results are shown in table 2: 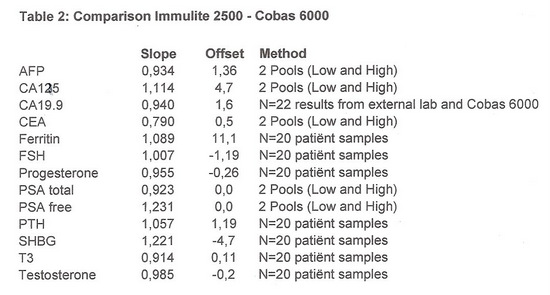 The results in table 2 confirm the differences seen in the EQA scheme.

This procedure was programmed in our laboratory information system, eventually triggering the drawing of an extra tube of blood for the measurement on the Immulite.

It is expected that in the end of 2012 the double measurement will come to an end and all samples can be measured on the Cobas 6000 only.

The allowable percentage of difference in the results with both methods was determined based on TEa, as shown in table 3:

For the samples measured with both analysers the ratio between Immulite and Cobas 6000 result was calculated.

The historical results were checked and in case of unexpected differences measurements were repeated.

For setting the QC-rules for most tests we used the long term CV (>200 results) from our internal QC and assumed the bias 0. Because of a QC-lot change since the migration we only had 42 – 49 results available for some tests.

For the TEa the desirable specifications from the “Ricos table” were used.

These numbers were entered in Westgard QC’s EZ Rules3 program, giving us an advice on the set of

qc-rules to apply and the number and frequency of control measurements.

Table 4 shows the Sigma-scores for each level, the number of results used to calculate the sigmascore (n) and the QC-Rules and frequency advised by EZRules3. 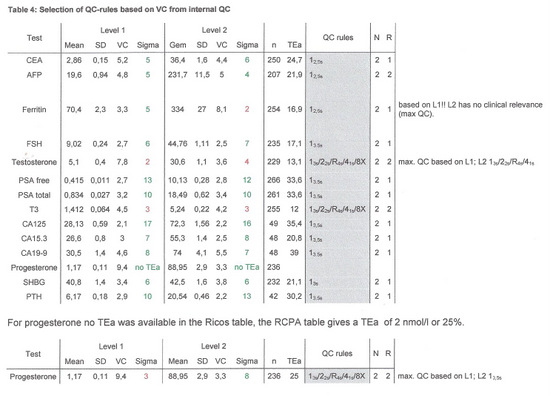 If for level 1 and 2 different QC-rules were advised the most stringent set of rules was applied, except for ferritin, where the high control has a value in a clinical not relevant range.